The Holocaust: beyond memorials...

I recently visited a memorial for Jewish victims of the Holocaust. Its six million markings commemorate the lives lost by the Jewish community to Nazi atrocities during the Second World War. Such memorials—along with Holocaust books, movies, poems, paintings, dramas, film documentaries, and Web sites—implore humanity not to forget the tragic events that occurred, and never to let such terrible acts take place again. To the degree they succeed in fostering more humane behavior, they make a valuable contribution to society. But it will clearly take more than memorials and accounts of atrocities to prevent their recurrence.

I grew up in a Jewish home in Europe, still in the shadow of World War II. Despite my parents' love and their amazing resilience as survivors of the Holocaust, the more I became aware of the events that had occurred, the more it became deeply ingrained in me that if the Holocaust had happened once, it could happen again. Each mention of the Holocaust, every detail I learned about it, made me more resigned to the inevitability of its repetition. 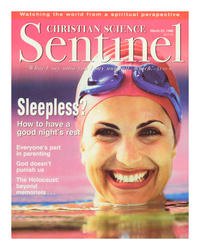