Fighting racism: from fists to prayer

A better response to racial hatred

I HAD just finished greeting a classmate and his friend, who were seated at a table in the university lounge. His friend, whom I did not know, said in a loud voice, "Oh, don't tell me you are friends with a 'wetback'! These people should not be in this university or even in this country." Although I felt upset by his statement, I ignored it, completed saying what I originally intended to say to the classmate, and then left.

When I was a teenager, my response to such treatment was often to fight back with words and even physical violence. But I grew in my understanding of God and of His love and His laws. As a result, I learned a way to respond to racism more effectively—the way of prayer and spiritual understanding.

God is imparting divine intelligence, love, and wisdom to each of us. He freely gives these to us because we are all, in fact, His children, made in His image. As the image, or spiritual idea, of God, divine Mind, I came to understand that physical appearance and human environment have nothing to do with our selfhood as God's children. Beginning to see this truth allowed me to stop judging according to the flesh, and to start looking for others' spiritual worth.

Bringing this view of man to our prayer and our actions wipes out the underpinnings of racism. For in the final analysis, it is not people who are to blame for the worst evils of racism, but the erroneous belief in a mind separate from God and opposed to good. It is this mentality that the understanding of God's love and laws eliminates.

To have felt the cutting lash of racial hatred does not necessarily free one from hating back, nor does it keep one from having racist attitudes toward other races or one's own race. Eliminating racism is not about making one race feel more guilty than another or labeling one race as more of a victim than another. Racist attitudes often hide behind self-righteousness, fear, envy, or even a prideful sense of being "good." We need to see beyond these human ways and means and appreciate man's God-given spiritual selfhood.

The common spiritual bond and worth that we share as children of the same divine Parent is expressed this way by Mary Baker Eddy in The First Church of Christ, Scientist, and Miscellany: "On this basis the brotherhood of all peoples is established; namely, one God, one Mind, and 'Love thy neighbor as thyself,' the basis on which and by which the infinite God, good, the Father-Mother Love, is ours and we are His in divine Science" (p. 281).

Interracial marriages have challenged old racial paradigms and classifications. Future accomplishments of genetic engineering will challenge material labels even further. The Apostle Paul had it right when he said, "The Spirit itself beareth witness with our spirit, that we are the children of God" (Rom. 8:16). He also said, "There is neither Jew nor Greek, there is neither bond nor free, there is neither male nor female: for ye are all one in Christ Jesus" (Gal. 3:28).

Our talents and abilities come from God and are not enhanced or diminished by race.

The master Christian, Christ Jesus, embraced everyone in his healing love. Although he was a Jew, he recognized goodness and receptivity to God in individuals who belonged to groups that were despised by his own culture, among them the Samaritans and Romans.

Our talents and abilities, like our spirituality, come from God, and they are not enhanced or diminished by race. Prayer helps us to free ourselves of inferiority complexes, fears, self-condemnation, and personal limitations by helping us to see our true, spiritual selfhood, which is endowed with unlimited ability and opportunity.

Send a comment to the editors
NEXT IN THIS ISSUE
Article
Noah built a boat, and his descendants, a giant tower 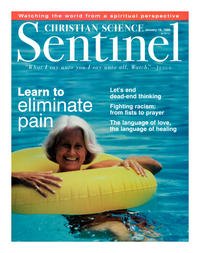