"Mars and Venus"—making the most important distinctions

The June 16, 1997, issue of TIME magazine ran an article, "Tower of Psychobabble," focusing primarily on the book Men are from Mars, Women are from Venus, and its spinoffs, by John Gray. The reviewer questioned Gray's credentials as an expert on relationships, as well as noting the financial empire the author is amassing through sales of his books, tapes, videos, and workshops. Regardless of Gray's professional expertise, though, his books as a group have sold nine million copies. Clearly, he has tapped into a subject that's important to many people.

As you talk with those who have found the Men are from Mars ... series helpful (also Mars and Venus on a Date, In the Bedroom, and others), it is the distinctions Gray draws that provide readers with the "aha's" the different ways men and women communicate, how they ask for directions! 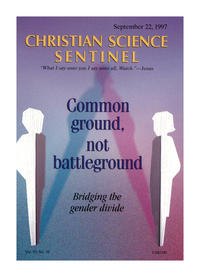