This week we publish excerpts from the baccalaureate address given in May by American journalist Bill Moyers at Brown University, Providence, Rhode Island. Mr. Moyers has enjoyed a career of extraordinary diversity. He holds a master's degree in theology; in the mid–1960s he was special assistant and press secretary to President Lyndon B. Johnson; he has been a director of the Peace Corps; and he has won over thirty Emmy awards for his contributions to public affairs television. Last year he hosted the series Genesis: A Living Conversation.

Mr. Moyers began his speech at Brown University by recalling a similar occasion at another American university when a young woman who had just graduated came up to him and said, "Mr. Moyers, you've been in both government and journalism. That makes everything you say twice as hard to believe!" For that reason, he said, he had chosen this time to draw upon more personal than professional experiences. "I want to talk to you not as a journalist," he said, "but as one more pilgrim wading through the postmodern swamp."

Send a comment to the editors
NEXT IN THIS ISSUE
Editorial
Young people, you're tomorrow's heroes 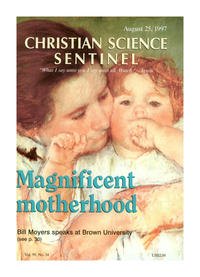