I first became interested in Christian Science when I found myself...

I first became interested in Christian Science when I found myself pregnant for the third time in a little more than three years. My previous two pregnancies had been far from happy experiences, and I had suffered greatly from debilitating varicose veins as well as weight loss. When I told a friend of my fears, she surprised me by saying, "You know, it doesn't have to be that way." She went on to explain that she was a Christian Scientist and told me of some beautiful healings that her family had had. She gave me a copy of Science and Health with Key to the Scriptures by Mary Baker Eddy. I started to read it, but found it very hard to understand. The pregnancy, however, developed in a very harmonious way, so the book was put to one side until many months later.

My husband changed his job, and we had to relocate just days before our third baby was born. All went well. Despite the so-called recession, we sold our house and soon found a suitable house to move into.

Send a comment to the editors
NEXT IN THIS ISSUE
Testimony of Healing
Several years ago, when I considered myself a "rookie" Christian Scientist... 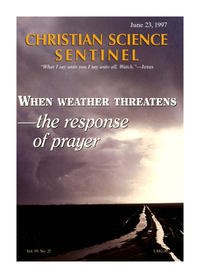