Years ago, when I became acquainted with Christian Science...

Years ago, when I became acquainted with Christian Science and had started attending church regularly (especially testimony meetings), I purchased Science and Health in Spanish. At that time we did not have the book in Portuguese. I had been suffering for four years with a neural problem, diagnosed by a famous doctor, which had prevented me from sleeping in a prone position. I had to spend most of the night sitting up in bed, and this problem was leading me to despair. It caused suffering and fatigue, due to lack of sleep. I also would not allow myself to miss work.

Send a comment to the editors
NEXT IN THIS ISSUE
Testimony of Healing
For many years, well over a decade, I had nightmares in which... 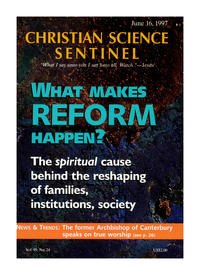