"Masters of the body"

In the 1840s Mary Baker Eddy saw slavery firsthand. Moving from New Hampshire to her husband's home in South Carolina, she found that her new household included slaves. She knew that slavery was wrong. When her husband passed away within the first year of their marriage, she let the slaves go free. See Mary Baker Eddy, Message to The Mother Church for 1902, p. 15, and Robert Peel, Mary Baker Eddy: The Years of Discovery (Boston: The Christian Science Publishing Society, originally published by Holt, Rinehart and Winston, 1966), p. 75.

Then in 1866, less than a year after the Civil War marked the end of the slave era in the United States, Mrs. Eddy discovered that there are laws of God which bring freedom from a more universal and insidious form of slavery—slavery to the body. She later wrote a book that explains these laws of God. In Science and Health with Key to the Scriptures she states: The enslavement of man is not legitimate. It will cease when man enters into his heritage of freedom, his God-given dominion over the material senses. Mortals will some day assert their freedom in the name of Almighty God. Then they will control their own bodies through the understanding of divine Science." The following paragraph continues, "If we follow the command of our Master, 'Take no thought for your life,' we shall never depend on bodily conditions, structure, or economy, but we shall be masters of the body, dictate its terms, and form and control it with Truth" (p. 228). 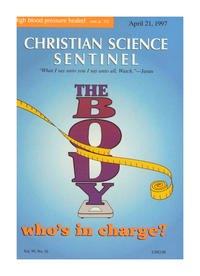