Photojournalism: its potential to inspire

In recent months, the prominence in the news of paparazzi has raised questions about the role of photographers. This week, the Sentinel talks with two longtime photographers, who discuss the higher ideals of photojournalism.

Melanie Stetson Freeman is the Assistant Director of Photography and a Senior Photographer at The Christian Science Monitor, where she has worked for the past twelve years. In 1987, she received the World Hunger Year Media Award for her work on the Monitor series "Children in Darkness." She earned her master of arts at the University of Missouri School of Journalism, and spent two years as a photographer for the Orange County Register in Santa Ana, California. 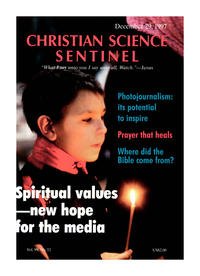