"The words we say, each to the other"

Communication —with our friends, our family, the stranger that we meet for the first time, our co-workers, our neighbors—is among the most vital aspects of human life. For some people, communication isn't always easy. Others speak readily whatever is on their minds. Yet the words themselves, whether they come easily or not, may sometimes be less than we hoped for. What we say might honestly be intended to be helpful or supportive but may instead result in confusion or even turn out to be hurtful. We've all had occasions when the words came out wrong. We were misunderstood, or perhaps what we said was taken to mean exactly the opposite of what we had tried so hard to impart.

Not long ago, something I heard on a television documentary was quite moving. A Native American from the southwestern United States was pointing out how our communication with one another can be motivated in such a way that the words are genuinely constructive and always understood. His message was presented over the background of Native American music and a stirring Navajo chant. He said:

Send a comment to the editors
NEXT IN THIS ISSUE
Testimony of Healing
I was alone at home one afternoon when there was an urgent... 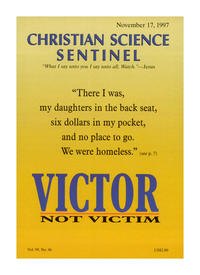