Have you ever had the feeling that you are standing around on the fringes of life, waiting for your right place and purpose suddenly to appear? Many people accept that for one reason or another this is the way it has to be.

Earlier in my life, I prayed diligently for several years to bring about a change in my work situation because I believed I was stuck in an unrewarding position. But in spite of my efforts, it appeared that nothing was happening. Then one morning as I was praying, the thought came to me very clearly that a spiritual idea could not possibly be misplaced or locked into any unhappy, unfulfilling situation, anymore than a sunbeam could be separated from the sun, the source of its energy and activity. I knew that my only true selfhood was wholly spiritual, and I realized that the suffering came, not from the circumstances, but from accepting the belief that such a thing could be true. I knew God, Spirit, was the sole source, substance, and condition of my being. This was divine law; therefore I was inseparable from this truth. I could see that this was the only real place or position I had ever been, or could ever be, in. It was secure and unassailable. There was a total yielding of thought to this spiritual fact.

Send a comment to the editors
NEXT IN THIS ISSUE
Article
Why are you doing what you're doing? 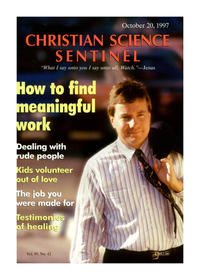