"That was a good film," I commented to my wife with some surprise. The previews we'd seen some weeks earlier had us thinking that the movie would be of no interest to us. But a few friends highly recommended we see it for ourselves. They said the film was actually quite thoughtful, funny, and intelligent, despite the way in which it was promoted.

I've been seeing previews of a different sort recently—stories in the news telling us what we can expect to see over the next decade with a 23 percent jump in the number of teenagers in the United States. With the additional teens, we're warned, will come additional crime. Even though this rise in crime has yet to occur, people are being told they should expect it and prepare for it.

Send a comment to the editors
NEXT IN THIS ISSUE
Editorial
Simple, penetrating truth 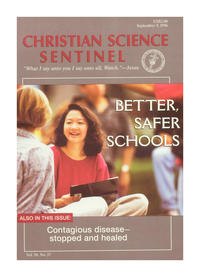