On a bright, sunny morning I had planned to rotate the tires...

On a bright, sunny morning I had planned to rotate the tires on my car as I did annually. Some months before, however, the wheels had been removed by the attendant at a service station to inspect the brakes. He had used an air gun to tighten the lug nuts to the wheel axle, so the nuts were on very tightly. As I removed the lug nuts from the first wheel, seizures paralyzed the left side of my body, making it difficult for me to move my leg, side, and arm without severe pain. For a while I simply lay on my back beside the wheel that I had been removing. Totally alone, I silently recited the Lord's Prayer and "the scientific statement of being" from Science and Health with Key to the Scriptures.

Having gained control mentally, I continued to pray. I vehemently denied evidence of injury and incapacitation as realities, and I reflected on the omnipotence of Spirit, God, and the ever-presence of divine Love. Spirit does not inflict pain. Love never leaves man in distress. As I raised myself to go into the house, the pain intensified, but I was able to climb the entrance stairs and go into the house. Inside, I climbed the stairs to my room on the second floor. I remained in the room reciting aloud spiritual truths as they came to thought. Years before I had memorized many truths from the Bible and Science and Health as a pupil in the Christian Science Sunday School, and later as a student taught by an authorized teacher of Christian Science.

Send a comment to the editors
NEXT IN THIS ISSUE
Testimony of Healing
Recently while changing the display in our Christian Science... 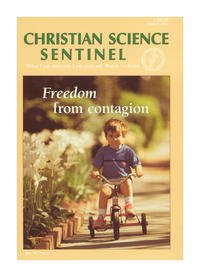