What to do about discord at home

Do your parents ever get mad at each other? When I was growing up there was nothing worse than those days when my parents didn't get along so well. A hand would bang on the table. An argument would start, and it seemed like my whole world would fall apart. It wasn't rational; but it was the most frightening thing to me. Sometimes parents can lose sight of how much their children and teenagers depend upon the stability and security of home and family. I've learned since then that many young people experience things far worse than I ever did. Their parents hurt each other. They may be drunk or abusive. I don't know what I would have done in that type of situation.

As it was, I simply endured those times, and they weren't frequent. Unfortunately, the fear didn't go away all that fast. Because our family was very private, I never considered talking to anyone about what I was feeling. I never brought it up in Sunday School because, of course, everyone knew my parents, and that would have been too embarrassing. I never spoke with a Christian Science practitioner (an individual who helps others through prayer). It just never occurred to me. I didn't know that what I said to a practitioner would be totally confidential. I didn't know there was someone who could help me with something like this. So, I took each day as it came, and went on. But if things had been a lot worse, as it is for many, many children and teenagers, I don't think I could have just endured. I would have had to do something more. 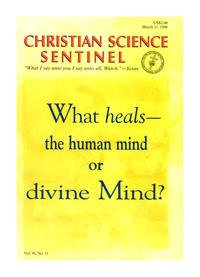