This week happens to be a big one for individuals seeking to become...

This week happens to be a big one for individuals seeking to become the Republican candidates for the presidency of the United States. But this focus on government is about more than just the American primaries. No matter where in the world people live, everyone has to deal with government on many levels: the self-government that protects one from doing things he or she will regret, the organizational structure that brings order to churches and other institutions, and one's interaction with the civil authorities for a town, state, province, or nation.

The two authors in this section offer ideas that can be applied in our prayers, particularly for government on the national and local level. Yet the thoughts they offer make clear that the roots of stability are found in individual self-government under God's care and direction. Other articles in this issue explore this concept as it touches different parts of human life. 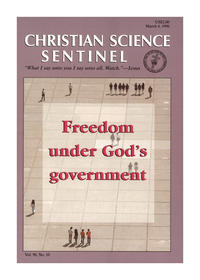