Business ethics— and the Bible

It seems that hardly a day goes by without the newspaper, radio, television, or some personal circumstance bringing an unethical situation to our attention. But the experiences of people described in the Bible show us that such conditions can be changed for the better.

The Bible gives us a history of God and His relationship to man. It tells us of a people striving to overcome obstacles while searching out a clearer understanding of the Supreme Being. It offers us solid guidance on how to heal unethical behavior in ourselves and in others. For example, Daniel was entrapped by those jealous of him (see Dan. 6:1–23). Joseph was sold into slavery by envious brothers and was the object of Potiphar's wife's adulterous designs (see Gen. 37:23–36; 39:1–45:8). In these and other cases, the Bible tells how God's power heals and saves those who turn to Him. As the Bible says of Daniel—after he had spent a night in a den of lions—"So Daniel was taken up out of the den, and no manner of hurt was found upon him, because he believed in his God" (Dan. 6:23). Reliance on God and willingness to follow His direction made all the difference. 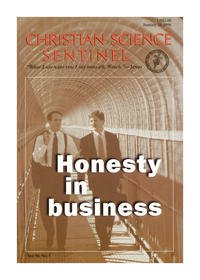