In March a former computer industry executive, Reed Harris, spoke to an audience in a high-school auditorium, and suggested that while many people said they trusted God, their hopes were actually invested in other people, in conflicting "expert" opinion, or in government. Yet, said Mr. Harris, a member of The Christian Science Board of Lectureship, if people would return their trust to the one all-powerful God, good, to govern their lives, they would find the truth that makes people free—the truth that heals.

What made this Christian Science lecture unusual was that Mr. Harris, who is a Christian Science practitioner, was introduced by someone with different views on health care. She's Dr. Lisa Stone, a medical internist who is married to a cardiologist. Both her father and grandfather were physicians. 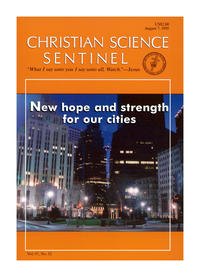