David conquered a lion, a giant, and fear

One morning on vacation, a bunch of us were in a helicopter over one of the Hawaiian Islands—our tour director had said that this was the best way to see all its rugged beauty. I'd been assigned the front seat, and I wasn't feeling up to counting all the waterfalls, which a friend who loved being in helicopters (and had just gotten off one) had suggested.

As we were about to swoop over a mountain that looked only inches away, the fear was overwhelming. I thought of David and Goliath (see I Sam., chap. 17). Suddenly, I realized: David hadn't thought of himself as being a victim of overwhelming circumstances. On the contrary, he had volunteered to fight the giant, Goliath, who was bragging that he'd make David's countrymen his slaves. 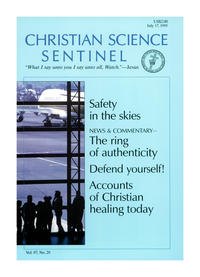