Have you ever found yourself in an uncomfortable or scary spot with no way out? I remember one such time when I had just left home for college. I was excited about playing on the women's soccer team. On an early road trip to another state, though, it became apparent that my new teammates were very different from my high-school friends back home. They had packed a cooler of beer and had all started drinking—including the driver. Then they passed marijuana joints around. I said "no thanks" to both and offered to drive, but I was told freshmen weren't allowed to drive.

I felt trapped and wanted to be anywhere but in that car. The more they tried to get me to join in, the more miserable I became. I rolled the window down for some fresh air, and closed my eyes in an attempt to make myself disappear. Then, the thought came to me, "You could pray," followed by another thought—"Oh, great, what good will that do now?" I figured I had just allowed myself to get in with the wrong crowd, and when I got back to school I would disassociate myself from them. Since it would be a while before that happened, though, I thought, "OK, God, how do I get out of this one?"

Send a comment to the editors
NEXT IN THIS ISSUE
Article
Loving to think about God as all-important ... caring about... 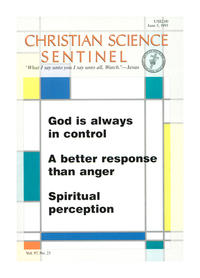