On Halloween eve in 1938, Orson Welles frightened a radio audience with an extremely realistic report of an invasion on Earth from Mars. Many listeners did not hear the opening of the program, which identified it clearly as a radio drama. Because the show used the reporting methods common to news reports, many who tuned in after the show had started felt that something terrible was going on. A number of people panicked. It wasn't until the end of the program that many listeners discovered they had been hearing a play rather than the news.

It's helpful to keep this incident in thought as the media present their seasonal reports of various flu outbreaks and other viral infections. To someone new to the practice of Christian Science healing, the relationship between these two situations may seem hard to grasp. But the experience of spiritual healing reveals that a Christian has the ability to prove that present-day media reports of sickness are as unfounded as Welles's Martian attack. Following Jesus' example, the Christian metaphysician can dispel suffering and establish health where sickness seems to be running its course. This is part of the good news of the gospel; and to those who have suffered yearly bouts of sickness, this is good news indeed!

Send a comment to the editors
NEXT IN THIS ISSUE
Testimony of Healing
I was working in the Federal Government Ministry in Lagos... 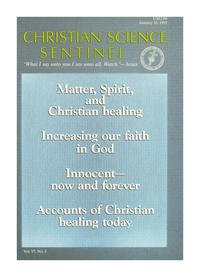