Religious freedom within the family

I enjoyed growing up in a family where religious freedom was the daily norm. Religious conviction was considered to be a matter of individual conscience. It was recognized that each person has a right to grow into his or her own understanding concerning religious beliefs and to be true to them in practice. People of all faiths were respected for living in accord with their convictions—whether or not we happened to share their beliefs. It was a fine illustration of the Golden Rule given to humanity by Christ Jesus: "All things whatsoever ye would that men should do to you, do ye even so to them" (Matt. 7:12). Consequently, though my siblings and I received religious training in the local Episcopal church (where I was active right through high school), we felt free to pursue (or not to pursue) our own religious exploration.

My husband, soon after we began dating, laid the groundwork for the same kind of religious freedom to flourish in our own relationship and family life. He did it through his practice of the Golden Rule—establishing mutual respect between us in regard to individual religious convictions. After telling me he would like me to wear his fraternity pin (as a commitment to date only one another), he said: "Before you give me your answer, I need to tell you something. I am a Christian Scientist, and I expect to be one for the rest of my life. I don't know right now if our relationship will lead us to consider marriage, but I want you to know that when I do marry, I will expect my wife to let me lead the life of a Christian Scientist." 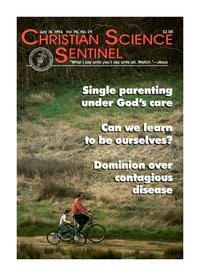