I would like to share what is certainly my most profound spiritual healing to date, as well as a turning point in my life as a Christian Scientist. I had been raised in this religion, and regularly attended Sunday School. In high School and college, however, I grew away from it until it had little relevance in my life. At the time I felt Christian Science wouldn't work for me; I felt I wasn't worthy enough to be healed.

After graduation I moved to a small town in Colorado. I began to want to learn more about God. I felt a strong need to find our who I really was and what part, if any, Christian Science could play in my life. One day I went hiking with some friends in the mountains. A girlfriend and I, known for testing ourselves, had climbed down to the base of a huge waterfall. Instead of taking the easier way back up, she and I decided to try and climb a much steeper slope without the aid of ropes, It was really difficult in places, and as we climbed it began to rain. Cold and tired, I became impatient to reach the top, where our other friends were waiting for us. Without testing it first, I put all my weight on a rock that suddenly gave way under my hand. I began to tumble backward down the side of the mountain. We were quite high up, and as I gained speed, I began turning and over end. My clearest memory at that time is of repeating to myself "God is Love"—most likely the first thing I ever learned in Sunday School. When I finally stopped (thankfully missing any trees or jagged cliffs), I lay still and began repeating, " I am God's perfect child." The words immediately comforted me, and I was able to shout to my friends so that they could find me. 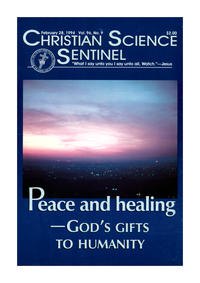