My mother was born almost blind, able to distinguish only...

My mother was born almost blind, able to distinguish only light and color. Christian Science healed her when she was in her early teens. Although as a child I thought this wonderful, I wouldn't accept Christian Science, and even tried to explain her healing materially. My mother wisely never tried to force her religion on me, but simply continued to practice it and to show her love for God.

Finally, after the end of a short and unhappy marriage, I started to study Science and Health and became a member of The Mother Church.

Send a comment to the editors
NEXT IN THIS ISSUE
Testimony of Healing
In spite of the fact that I have been studying Christian Science... 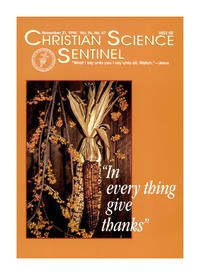