A few years ago I was manager of the quality control department...

A Few years ago I was manager of the quality control department in my new company. Another department manager had a viewpoint diametrically opposite to mine. He had been with the company many years, and apparently felt quality control always acted in a way that was detrimental to production. This caused him to act dishonestly on various occasions, and he gave reports about my actions that weren't true. His accusations were very personal, and I didn't carry sufficient weight to contradict them effectively. As a result, problems came up with our product that caused a great loss of money for the company, and for which I appeared to be at fault. It was apparent that as long as this man held to his dishonest position, this loss would harm the progress of the company.

During this time I prayed a lot in order to understand man's integrity as a child of God, and to realize that there is spiritual strength in honesty. At that time a statement of Mary Baker Eddy's from Science and Health with Key to the Scriptures came to me: "Honesty is spiritual power. Dishonesty is human weakness, which forfeits divine help" (p. 453). This statement gave me much support, so that I could maintain my own honesty, and not act in the same way—that is, not combat dishonesty with more dishonesty. That firmness in the truth which we learn in Christian Science gave me the strength to continue praying and working and doing what I honestly considered was my best work. I resolved to act with integrity.

Send a comment to the editors
NEXT IN THIS ISSUE
Testimony of Healing
For many years the testimonies in the Christian Science... 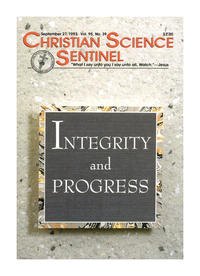