"Can I contribute to eliminating violence?"

Love may seem like an unusual response to violent behavior, but love has a power that heals.

One afternoon when I was at work, a terrifying noise shook the center of the city. When we went to the office window, we could see a thick clould of black smoke. Confusion and then panic spread throughout the place. A few minutes later, the media broadcast the news that unknown terrorists had set off a powerful bomb in a foreign embassy. The building was totally destroyed. Private residences, offices, a kindergarten, a senior citizens' home, a church, and automobiles had been severely damaged. There were many wounded and dead.

Send a comment to the editors
NEXT IN THIS ISSUE
Article
"Ethnic cleansing"—can it prevail? 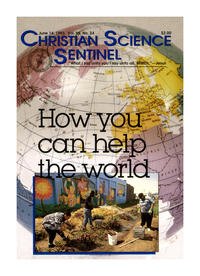