In the spring of 1990 I took an extended vacation to visit my...

In the spring of 1990 I took an extended vacation to visit my daughter and son-in-law. They were both stationed with the United States Air Force in Europe. My daughter was expecting the birth of their first child in August; she had met and married her husband in England, and it was my intention not only to vacation, but to get to know my son-in-law.

One of the activities we had planned was a week-long tour of Scotland in their family car. The fourth day, as we were returning from the north coast and approaching Inverness, the car began to overheat. We stopped at a service station to fill up with gas, refresh ourselves, and check the radiator. About five minutes after our arrival I returned to the car and, thinking it had had time to cool, turned the radiator cap. There was an immediate boiling sound, the cap was blown out of my hand, and a large stream of boiling coolant hit me squarely in the face, going into my mouth and eyes.

Send a comment to the editors
NEXT IN THIS ISSUE
Testimony of Healing
Four years ago my husband and I were going with a friend... 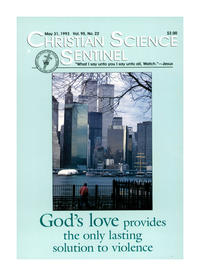