"Healing and the Mind"

Comments on the topic of a recent PBS television series

Throughout the United States hundreds of study groups have been formed to discuss the questions and issues raised by the recent television series hosted by reporter Bill Moyers called "Healing and the Mind." They are using a study guide prepared to accompany the programs, which ran late in February.

Any step that uncovers the mental nature of sickness and disease or how mental factors affect them is progressive. But as long as mind is equated with brain, progress will be limited. 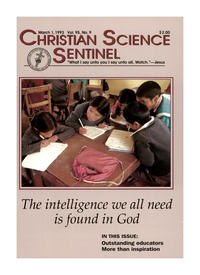