"As long as you eat our food and sleep in our beds, you go to Sunday School." That was the rule that got me in the car on Sunday mornings, and as a teenager I made my parents remind me of this more than once. As a result, I brought a certain air of unresponsiveness to the class that probably caused more than one Sunday School teacher to say an extra prayer before or during those sessions.

Thank goodness for those prayers—and for those of my parents. That spiritual education established a frame of reference that I could turn to when I found that "going it alone"—that is, trying life without a spiritual framework—wasn't working. Actually, it was more than a frame of reference. Because of the spiritual education I received at home and at church, I had an inherent sense that God was, in the words of the Bible, "a very present help in trouble." It just took a while to have enough troubles to get me to the point of finding out if that was really true. But when that time came, I found that the groundwork which had been put in place while I was growing up was sufficient to cause me to seek God's help.

Send a comment to the editors
NEXT IN THIS ISSUE
Editorial
"If you smile, the kids will think you're a pushover" 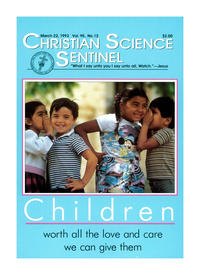