A lesson from Dothan

The enemy moved by night and surrounded the city. As dawn broke, Elisha's servant went out and saw that he and his master were in great danger for there was no way of escape. He was sure that the ongoing duel between Elisha and the king of Syria was over. "Alas, my master!" he cried, "how shall we do?" Elisha's reply was unexpected. "Fear not: for they that be with us are more than they that be with them." Yet Elisha was standing alone with his servant, while the city was surrounded by troops with their horses and chariots, and their sole purpose was to capture him and bring him to the king of Syria (see II Kings, chap. 6).

What the king of Syria never understood was that Elisha was a man of God. That means a lot more than simply being a good man. It signifies that Elisha knew God, that he communed with God, was conscious of His practical presence and power. The Almighty was to Elisha almighty, literally. He recognized no additional power, force, dominion, or rule. God was the king of the nations, and all were subject to Him. The more he witnessed God's power and law, the more he found life brought into accord with God's will. For Elisha, there was never a question of what would triumph in the contest between spiritual might and human force. So, faced with his servant's despair, he prayed: "Lord, I pray thee, open his eyes, that he may see. And the Lord opened the eyes of the young man; and he saw: and, behold, the mountain was full of horses and chariots of fire round about Elisha." 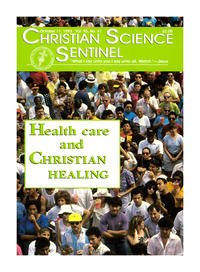