Soon the citizens of the United States will choose their President, but the election process is something that doesn't happen in a single day. For many months voters are blanketed with campaign speeches, interviews, rallies, and advertisements. It may seem practically impossible to make a decision for ourselves—so overwhelming are some of the campaign media efforts to think for the individual. Yet prayer helps to bring answers, and the first step is to break free from the herd, from individuality-robbing mass opinion merchandising.

When it comes to politics and political decisions, that's easier said than done. Perhaps the last thing someone feels like doing is praying about a political decision. It's easier to slip quietly into what may be a partisan-defined mental rut. The kind of balanced and divinely directed decisions and ideas that benefit mankind rarely seem to show themselves in such a rut.

Send a comment to the editors
NEXT IN THIS ISSUE
Testimony of Healing
About seven years ago I learned of Christian Science by... 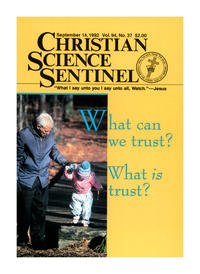