Heredity and the ousting of ghosts

Most people would probably argue they don't really believe in ghosts. But a good case could be made that many of them do. At least many of them certainly believe in being fascinated with these so-called spirits. Look back to the days of poltergeists. Or ask any Stephen King fan today. Movies, television themes, books, magazine stories—all provide a telling account of public interest in spooks. We may live in a scientific age, but scientific views sometimes seem more like little islands in a huge sea of worldly, superstitious beliefs.

Actually, more of us may hold a pretty solid belief in ghosts than we'd publicly be prepared to admit. But that's because the common perception of a ghost has to do with a white sheet covering some kind of eerie form floating around in a deserted house. That sort of silly belief just doesn't describe the ghosts that most people really do believe in.

Send a comment to the editors
NEXT IN THIS ISSUE
Article
Can rain come from the sun? 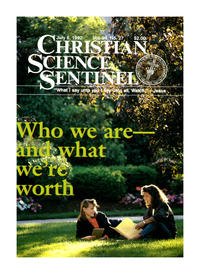