Imagine how the man at the pool at Bethesda must have felt when, after years of invalidism, he was instantaneously healed! In one life-changing moment he was free of the burden he had borne so long. His fruitless efforts to be the first one into the pool after the angel troubled the water must have left him discouraged, resigned to a life of helplessness. And then, suddenly, after a few brief words from the Master, Christ Jesus, the man was released from bondage.

This man was but one of a great number of people whom Jesus healed. The Gospels relate many more instances and indicate that he restored multitudes during his ministry. Christians acknowledge these healings, as well as those accomplished by Jesus' followers. But generally such healings are considered miraculous, limited only to Biblical times and highly unlikely to occur today. Yet Jesus clearly indicates that he expected his followers to heal. He said, "He that believeth on me, the works that I do shall he do also." 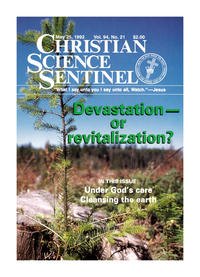