The week marks the five hundredth anniversary of Columbus's voyage to the New World. Of course, North and South America had already been inhabited for thousands of years. Yet for the people of Europe, this was an immensely significant discovery. And the impact on civilization, culture, and religion would be beyond what anyone imagined at the time.

Like many of the early European explorers in the Americas, people today still sometimes feel the need to conquer and subdue their world. But the social and environmental challenges we face are calling for something else—for a new discovery of value and meaning, for greater respect for the planet and all its inhabitants, for deeper caring, for healing.

Send a comment to the editors
NEXT IN THIS ISSUE
Article
"All my life I had been a seeker ..." 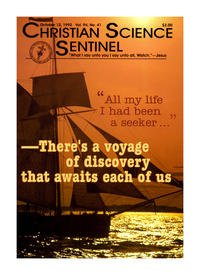