Breaking the stereotypes about children

Whether it's the pervasive influence of television violence and sensual music or the threat of gangs, drugs, and teenage pregnancy, the world can look like a very hostile place for children. They are regularly labeled as vulnerable and helpless in the face of that hostility.

Yet children also amaze us with their energy, their ingenuity, their resilience and strength. Most of all they may amaze us with their courage. It would be hard to forget, for instance, the tiny girl from Texas, who while the whole world watched, was brought up alive after days in an abandoned well. Or the children (including babies) who came safely through traumatic experiences in the Mexico City earthquake. We sometimes forget, in the midst of the tendency to dramatize misfortune, the many examples of young people who have reached adulthood and are now leading active, balanced lives despite years of physical or even sexual abuse. 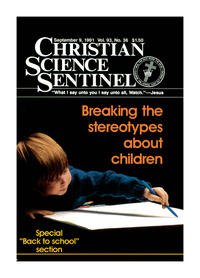