Prove the solution through prayer

There isn't a human problem we face that can't be solved by reliance on divine Principle and its provable laws.

Mr. NEWTON had a reputation as a tough teacher. He and I enjoyed a running joke during the extra semester it took me to get a passing grade in geometry: I would beg for a passing grade by telling him I would never darken his door again; and he would reply that it would be well worth the compromise to be rid of me. There was one point in particular that he taught which has stayed with me, however. We called it jokingly "Newton's Law."

He taught us that every properly defined plane geometry problem has a solution; that the proof is based on a fixed principle, and our work, done correctly, will very naturally lead us to it. (At the time, it seemed that this axiom applied only to the specifics of that class.) He also taught us to persist in finding the correct answer. "Prove the solution" was the catch phrase he used. 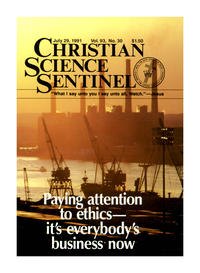