Meetings for youth of all faiths

Plans are underway for 1991 and 1992 Youth Meetings in the United States and Canada. As with the 1990 Youth Meetings, local Christian Scientists have initiated these meetings and opened them to all young people in their areas. (See the December 1990 and February 1991 issues of The Christian Science Journal for reports on the 1990 meetings.) Participants will explore prayer-based answers to personal and world issues. The format will include talks, workshops, music, as well as time for informal sharing, making new friends, and thinking about what's been said.

Everyone from age twelve through thirty is invited. 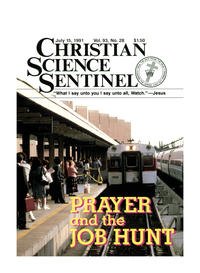