One day I noticed a little growth on my body, but I thought...

One day I noticed a little growth on my body, but I thought nothing much of it. Several days later, however, I noticed it again; it had grown and was causing me discomfort. I realized I needed to pray about this, and I called a Christian Science practitioner who agreed to pray with me.

For several days the physical condition did not get better but appeared to get worse. What did get better was my "listening attitude." I became more attentive to the "angel messages" from God that are ever present for our help. Some time earlier I had been to a Christian Science lecture in which the speaker had talked about the flawlessness of God's man. I realized that my true, spiritual selfhood is flawless, unmarred, and healthy. I saw that in reality I had always been perfect, spotless, and whole as God's image and likeness; it was only fear that needed to be eradicated from my thinking. By praying this way, the fear was met and mastered. 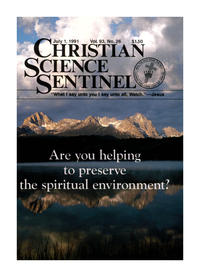