When we gain a view of the infinite nature of God's goodness, human problems are shown to be small-time indeed.

As I thanked someone for something he had done for me, he promptly replied, "No problem!" I smiled as I thought of how often we hear that response when we thank people for something. It's almost a reflex response that's usually said quickly, easily, and kindly.

Later in the day I had occasion to think more deeply about that statement. I was talking with several friends who were not only facing problems in their personal lives but were also concerned about current national and international difficulties. These people were accustomed to turning to God in prayer for practical solutions. But where to begin? Should they first pray for themselves, then for their families, and then for the world? Along those same lines, how should they respond to friends who came to them to discuss still other problems? They needed to find a way to be compassionate and caring, yet not be overwhelmed with the sheer volume of issues needing to be resolved. 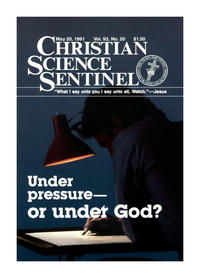