"Upon the wings of the wind"

Prayer may at first seem futile in the face of widespread destruction. But a willingness to pray—even if it feels modest—brings healing and peace into view.

The thought of chemical and biological warfare seems particularly chilling to the human heart. There's something to be considered in how the subject of late has been spread through the news. What opened my eyes was a comment by a political scientist at the State University of New York in the December 10, 1990, issue of Time. "The enemy is talking to us, giving us nightly forecasts of doom." It was a telling comment—a bold reminder of the need to resist the tyranny of fear.

"Fear," Mrs. Eddy once wrote in her book Miscellaneous Writings, "is the weapon in the hands of tyrants." It is important to understand that such a statement doesn't acknowledge the power of tyrants. Rather, it uncovers a method of domination so that it can be destroyed. 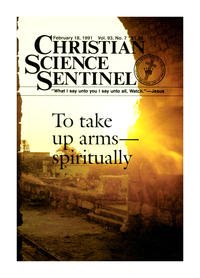