For many years the articles and testimonies in the Sentinel...

For many years the articles and testimonies in the Sentinel have provided me with much inspiration and hope. In fact, the first instantaneous healing I experienced through Christian Science occurred while I was reading the Sentinel. One day while on my way to an appointment, I felt so overcome with menstrual cramps I thought I might faint on the sidewalk. I was able to get a taxi, then immediately pulled a Sentinel out of my purse and opened to the testimonies of healing in the back. As I read I became so filled with gratitude for God's goodness, rejoicing with the testifiers, that the discomfort faded away. Only fifteen blocks later, as I was getting out of the cab, I realized I was completely well!

Many Biblical accounts refer to God speaking to people. I have had many instances of inspiration coming to my thought in the form of Bible verses or hymns or statements from Science and Health by Mrs. Eddy, but a recent experience was somewhat different. I was walking along the sidewalk, thinking of someone who had been mean to me and rehearsing all the harsh things I could say to that person. All of a sudden I thought, "This is ridiculous! You need to get off this treadmill and heal this situation, not make it worse." 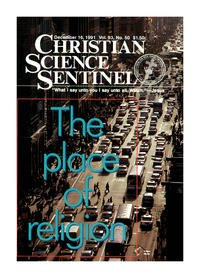