If you want to do something, reach for your Bible!

When Natan Shcharansky was released after serving thirteen years in a Soviet labor camp, he refused to leave without the Psalms, which he said had been such a help to him. A few years ago, the pilot of a plane hijacked by terrorists and held at the Beirut airport said that during the seventeen-day ordeal he read the Bible so much he nearly wore it out. We're told also that the most widely circulated publication among troops during the Persian Gulf War was the Bible.

Clearly, the Scriptures give us spiritual light when we most need it. And they not only assure us of God's care; they enable us to prove it. 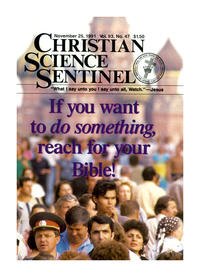