Some weeks ago in the Sentinel we announced upcoming special issue Sentinels to be published in conjunction with meetings for young people being held this year in South Africa, Australia, New Zealand, and Europe. The first issue was entitled "Your world needs you." We're happy to be able to tell you of a second issue, "Citizens of the world, ... be free!" being published in conjunction with the European youth meeting in Hamburg, September 28-30. This second issue includes articles and features on such topics as education, the environment, Christian healing, breaking the hold of drug addiction, and helping our communities disarm violence and racial tensions. The issue contains some of the same articles and testimonies as the first, but also offers a Spanish translation of an article, French and German translations of testimonies, and a "Second Thought" translated into Czech. The two editorials, which are different from those in the first special issue, are also printed in translation, one in French and the other in German. 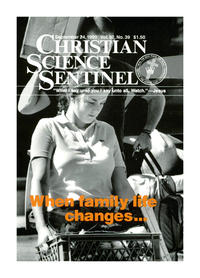