The transforming power of prayer

Her family seemed trapped in a web of difficulties. "It's not just that things are so awful, but that I can't see any possibility for change on the horizon—that's what sinks my heart," she confided to her friend.

When her friend shared some ideas he'd learned about prayer through his study of Christian Science, she listened and became so interested that she took up the study of it, too. After that, her experience changed to such a degree that she described her "old" life as "a badly written story that finally began to be revised."

Send a comment to the editors
NEXT IN THIS ISSUE
Article
"Citizens of the world, be free!" 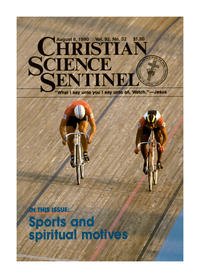