Where our questions can lead

I had a friend I liked very much. When he first moved to our city, he was one of the friendliest guys I knew. Unlike the rest of us, who mostly played rough-and-tumble sports, he was a swimmer. It was really something, too, to watch him in the water. The rest of us looked like beached whales while he flowed through the water as if it were his home.

Apparently he felt he had a hard time fitting in with a new school and new people. The result of this strain was that his lifestyle changed tremendously, and not happily. Then he was in an accident that took him a long time to recover from; he had to give up his hopes of going to the Olympics. Later he struggled with alcoholism. A number of us spent time trying to help him pull through these troubles.

Send a comment to the editors
NEXT IN THIS ISSUE
Article
"I'm not afraid!" 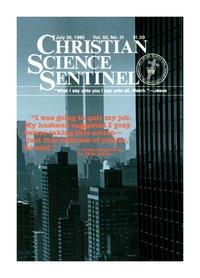