One healing I've had through Christian Science took place...

One healing I've had through Christian Science took place while I was crossing the Tasman Sea by ship. The winds were strong and the waves were very high. The sea was so rough the ship lost a stabilizer. I was quite seasick and began to pray. A statement from Miscellaneous Writings by Mrs. Eddy came to thought: "Thus founded upon the rock of Christ, when storm and tempest beat against this sure foundation, you, safely sheltered in the strong tower of hope, faith, and Love, are God's nestlings; and He will hide you in His feathers till the storm has passed. Into His haven of Soul there enters no element of earth to cast out angels, to silence the right intuition which guides you safely home." After pondering this and other spiritual truths, I was healed.

Another healing took place in Belem, Brazil, when I was sightseeing. After a light rain, I stepped onto a tile floor and slid several feet. I hit the side of my face against a glass display case with such force that I fell and struck my chin on the floor. Though I felt a little shaken, I immediately prayed and became calmer. I knew that in reality no evil could touch my spiritual selfhood as God's likeness. A doctor in the crowd thought I needed stitches, but I took a taxi back to my hotel, where I prayed for myself and studied pages 390–395 in Science and Health by Mrs. Eddy and a hymn from the Christian Science Hymnal. Since I couldn't close my mouth or eat normally, I placed a call to a Christian Science practitioner for help through prayer. She helped me to still my thought and see that in truth I reflect the substance of Spirit and that I am whole. Before long the bleeding stopped, and I continued with my sightseeing the next day. Soon I was able to move my mouth and eat normally. All evidence of the accident disappeared.

Send a comment to the editors
NEXT IN THIS ISSUE
Testimony of Healing
I am truly grateful for Christian Science, to which I was... 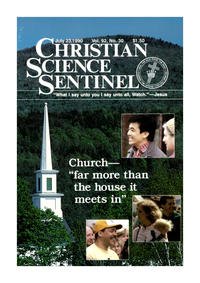