"Christian Science gives a fearless wing and firm foundation," states Mary Baker Eddy in Miscellaneous Writings. This statement, like the truths in Science and Health by Mrs. Eddy, has been an inspiration to me.

My mother had a difficult childhood and was not able to be an active child because of frail health. After she and my father were married, they moved to a remote part of northern Minnesota. A few years later, Mother was taken to a small hospital, suffering from a ruptured appendix. She was not expected to recover. One of her sisters had heard of healings that had come about through Christian Science treatment, and she had begun a serious study of Science. She drove several hundred miles north to read to Mother from Science and Health.

Send a comment to the editors
NEXT IN THIS ISSUE
Testimony of Healing
It is out of love for Christian Science and for those searching... 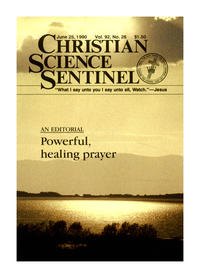