"On a plain white door at an office complex at Sukh Sagar was painted: Jer Master, CS. At one time, on the same door and under the same name (prefixed Dr.), was the word paediatrician. Inside was a sparsely furnished suite of rooms—bereft of the examining table and trappings of the medical professions such as voluminous books on children's diseases. Instead, were books written by Mary Baker Eddy, the founder of Christian Science. Founded in the 19th century, Christian Science brings to humanity an understanding of God and its practical effects in our lives. It is not a religion based on blind faith, it is not about waving a magic wand; it is a religion based on scientific reasoning and open to anyone. The following excerpts are a gleaning of what made Jer Master relinquish her practice of medicine for—

"Some years before I gave up my practice as a paediatrician, a friend of mine had given me some Christian Science (CS) literature and the Christian Science textbook—Science and Health with Key to the Scriptures by Mary Baker Eddy. Initially, I wasn't really interested in it. But as a paediatrician, I saw so many children who were ill, who could receive no medical help. Whatever was known in medicine had been done; and yet they were not improving. 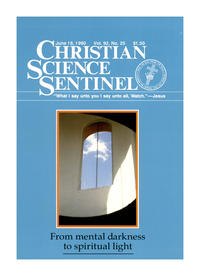