Human law is obviously important to an orderly functioning of society. Yet it also tends to be changeable. Divine law, based on God, Love, is changeless.

Having worked at one time in a law office, I grew to appreciate the workings of the law. I realized that although human laws had their fallibilities and limitations, they did give a glimpse of the grandeur of God's law, which was central to Christ Jesus' teachings.

It is incontestable that the laws of society play an essential role in human experience; in fact without such laws there would be chaos on the highways, in the air, and on railroads, as well as in other aspects of our daily lives. But in contrast to divine law, human law is subject to change. 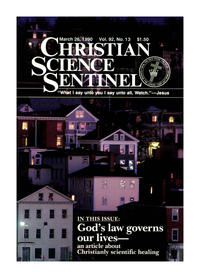