The time for final examinations at my university was approaching

The time for final examinations at my university was approaching. There was concern expressed among the students because the examinations were unexpectedly to cover the courses taken during the last two years rather than just the last semester. Although students were given a classes-free week in which to review for the examinations, there was a general feeling that it would be impossible to review all the material covering the two-year period. This fear became near panic for me.

It became necessary to leave the university and go home during the classes-free week to try to recuperate from the physical difficulties and emotional disturbances caused by the fears and confusion at the school. At home, my parents and a former Christian Science Sunday School teacher pointed out that I had studied thoroughly during the two-year period and the fear and confusion were unjustified; that it was inconsistent to believe that God, divine Love and Mind, was not always present with man and furnishing the intelligence of omniscient Mind. 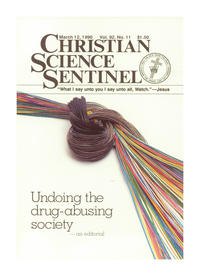