A single case of spiritual healing shifts the questioning from "Can it really take place?" to "How did it happen?"

July 20, 1969, Neil Armstrong walked on the moon. Years of preparation went into that momentous occasion. Millions watched the telecast, and millions more have heard Armstrong's historic words "That's one small step for a man, one giant leap for mankind."

But what if you lived in a part of the world where airplanes were unknown, let alone spaceships? It might sound impossible or ridiculous if someone told you that men had flown to the white ball suspended in the sky, walked on it, and flown back. Such an event being without precedent in your experience, it would require an open thought and a willingness to relinquish traditional beliefs before you could admit such a thing to be possible.

Send a comment to the editors
NEXT IN THIS ISSUE
Article
Wake up! 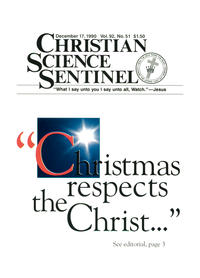