Christian unity "from a different angle of vision"

with contributions from Gerald Walton Paul

Last spring a newspaper in Kingston, Ontario, published a lengthy feature on the teachings and practice of Christian Science. Excerpts from the article, written by a United Church minister, appeared in the Sentinel's "Second Thought" column on November 5, 1990.

As might be expected, Christian Scientists appreciated the article's informative depth and fair-mindedness. The Sentinel Editors felt that it pointed, also, to an enlightened sense of ecumenism, of mutual support and appreciation among Christians, a willingness to look more deeply at the substance, rather than popular stereotypes, of others' faith.

Send a comment to the editors
NEXT IN THIS ISSUE
Article
Readers familiar with the language and style... 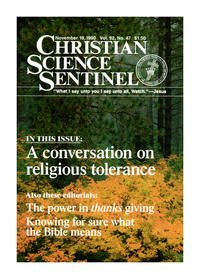